Futures fell as much as 1.6% in New York after earlier reaching a five-month high. U.S government data released Wednesday showed American drillers lifted output almost 9% during the past three weeks, the biggest three-week increase in half a decade. The exuberance of U.S explorers may offset supply curbs by OPEC and allied producers such as Russia.

“If we see signs of U.S production levels rising, the market is really vulnerable to a turnaround right now,” said Gene McGillian, a market research manager at Tradition Energy in Stamford, Conn. “We’re probably going to see a softening here until we can see a real indicator that supply has come down.”

Oil has risen more than 20% since late June, the classic definition of a bull market, amid forecasts for improving demand, the return of U.S Gulf Coast refiners after Hurricane Harvey, and Turkey’s threat to halt Kurdish crude shipment through its territory. The group has yet to decide on any extension of those curbs beyond March.

Even with some drillers idling righs in U.S oil fields, explorers have large backlogs of drilled wells that have yet to be turned on, McGillian said.

“At this levels, today’s action is an indicator that the market needs to be fed steady, positive information to really continue the rally,” he said.

West Texas Intermediate for November delivery fell 84 cents to $51.30/bbl at 12:40pm on the New York Mercantile Exchange. Total volume traded was about 13% above the 100-day average.

Brent for November settlement fell 91 cents to $56.99/bbl on the London-based ICE Futures Europe exchange. The global benchmark crude traded at a premium of $5.69 to WTI. 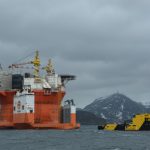